So, got futher this year 🙂
Still another nothing happened day, nothing to post about. Now you know why I don’t post so much 🙂

Walked past the poster at the bottom of this post the other day. What a load of rubbishy ramblings. What is the point of pasting that up outside a train station? It won’t get your (daft) point across to anyone. Good way to vent I guess. Apart from that,and being slightly offensive 😉 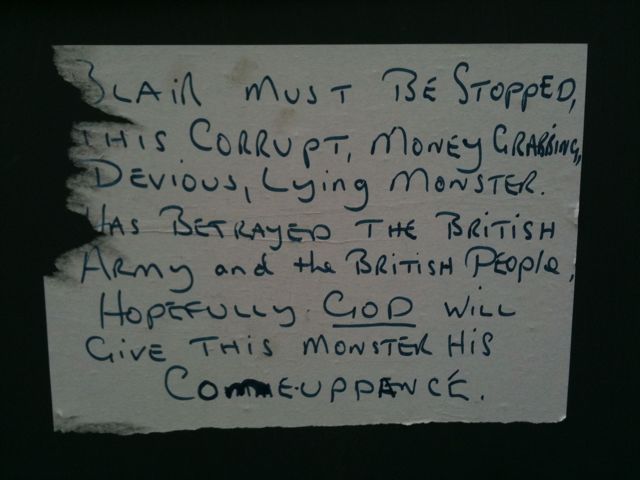 It’s official, Christmas is fast approaching. We’ve got the adverts, and after having seen the first christmasy thing a couple of months ago, now the shops are starting to put up their decoration. Still think it’s too early!

Mainly this post is a holding one, since not much happened today either. Still got the ticket open from ‘won’t listen’, just slowly talking him the issues he has with his site (more PEBKAC than anything else, but I don’t mind that as long as the user listens!).

Tickets, train ride home from the datacentre in the middle of the day, then more tickets. Pretty much sums up today.

What a strange name for an event. Anyway, yes, this is my second attempt at the interesting experiment, of posting once a day, every day during this month.1 I expect quite a few of these posts will be small, random and useless. Sorry about that, just to warn you!

Completed the “The Business” By Iain Banks the other week. Good book, though not one of his best… Gripping read from about ~60-70% of the way through. Predictable up to that point.
All about a large, democratic company, and the machinations and politics within it, as it looks to buy a small country, to attain a seat on the UN council.

Interesting and enjoyable enough read, but not spectacular by any stretch. I’ll not keep it for my book collection 🙂

Some other thoughts I had whilst talking to someone at church today… Working with the people I do, it’s easy to forget the fear and lack of knowledge a lot people have with computers. For me, they’re simple, far easier to understand than a human by any stretch of the imagination!

If you are ever afraid of a computer, the best thing you can do is to make a backup of all your files onto a USB stick, and then just play with your computer. Don’t be afraid of breaking anything, let your fear go. Just explore all the menus, options and settings, see what happens when you change things around. Right click on everything!

Tried this last year. Failed. Impressivly. So, trying again. I will try to blog every day this month, see where we go. Hopefully, I’ll be blogging more at the end…

Argh! I failed the challenge. Managed to get caught up watching a film last night, and before I knew it, it was past midnight.

Had a good day yesterday though. Apart from someone’s computer refusing to install / run Ubuntu (looked something like memory errors. Should probably do a memtest on it).

I probably will drop my posting now – there’s not much point now that I’ve failed. I can’t belive I failed over half way through. So frustrating 🙁

Yay! I’m actually going to get to church this week, for the first time in 4 weeks 🙂

(Yes, for those readers who don’t know, I’m a Christian)

Reasons I haven’t been to church the past 3 weeks:

So this week I get to go to church, and next weekend I don’t, as we’ve got the last server move. I’ve been trying to find a new church at the moment, which is harder than it sounds in London. At the moment, I’m going to one that my friend (and old youthleader) Roger is working for 🙂

Week 2’s story… A server failed during the day (partitions went read-only) and so I had to go to the datacentre, to replace the hardware. (That was when I was twittering about a debian install being stubborn about picking up mirrors. In the end, a reboot and reinstall from scratch sorted it – its routing table was stuffed.) Started to go in at 2000 Saturday, arrived back in town at about 0030 Sunday. ish.

Anyway, that’s enough rambling. I need to run to catch the tube 🙂 Hopefully tomorow’s blog will have a bit more content and a little less rambling 🙂

Danni blogged about starting NaBloPoMo, or writing a blog post every day in the month of November. This is for those who can’t take part in the “write a book in a month” NaNoWriMo

So, I decided to start as well.. maybe I’ll actually get more active online again 🙂 Not quite sure what I’m actually going to write about over this month, but we’ll see how it goes.

Erm.. yes. Well, to be honest, I really couldn’t care less about the US election. Yes, I know the guy that gets elected will change the world (probably for the worse. Sorry guys, but your track record isn’t that good.) But I don’t care. Why? What will me worrying, thinking and reading about the US election give me?

Useful knowledge? Only if I’m an American. A sense of inclusion? erm… not an American. Warm fuzzy feeling? Ok, so now I’m just getting silly.

I can’t affect it in any way, so why should I spend my time reading up on it, and worrying on it? However, for those Americans who are reading, I’m not anti-american! (Most of the time 😉 )

Argh! They can be so frustrating! Its in our lease that we shouldn’t smoke. And they do. This morning, I was woken up by a guy from the downstairs flat, livid that again, he had lots of cigarette butts under his bedroom window. Unsurprisingly (in a 2 bed flat), the window just above his is my flatmates.

Then, we had an argument about the electric bill – apparently £40 is too much for 2 months, and she wants to move us to a different provider, which I really don’t want to do, because our provider is Good Energy (100% renewable). Not sure how that one’s going to turn out.

Early last month, I put the central heating on… next argument. Apparently, having the central heating on in October is madness, even though the temperature in the flat at the time was 15 degrees centigrade. Sorry, but that’s too cold for me when I’m sitting still for an hour or 3 next to a computer. (I’m a computer geek, what do you expect!) Finally defused that one, by agreeing to pay 2/3rds of the gas bill. (When she has her boyfriend around, who doesn’t help pay for any bills [apart from sky tv]). I feel like my kindness and “sure, I don’t mind that you have 3 friends round, I don’t mind that your boyfriend stays all the time and doesn’t help pay” attitude is being abused, and I don’t know what to do about it or how to deal with it.

The gas bill thing got brought up this month as well – apparently I have the central heating on FAR too much. Is 2 hours in the morning, before work, and 5 hours in the evening after work too much? Please comment!

Of late I’ve been working a lot. We’re moving Data centres, which is interesting – the new one is quite good, if a bit isolated, but its tiring. Still its fun getting to see every server we have 🙂

I have a couple of things I want to get done (like upgrading our internal wiki), but getting round to it is proving difficult due to the move increasing our workload. (Thankyou hardware raid array for deciding to wipe your partition table instead of rebuilding with your nice shiny new hard-drive, causing one of our sysadmin genius’s to have to rebuild it.)