A very small study was recently released, and covered prominently, which says chiefly;

“Even when you look at young and healthy people without chronic sleep problems, 99 percent of the time they show this first-night effect [sleeping in a new place] —this weird half-awake, half-asleep state,” says Yuka Sasaki from Brown University.

Interestingly, I think I’ve experienced this personally. I’ve bounced around a bit, moved, but my primary example was actually a night on which it was not my first sleeping somewhere.

I’ve had a few house/flatmates over the years, as has any young adult in the UK. Sharing is basically required for all but the richest, thanks to our current housing crisis. In this case, it was a flat in West Ealing, London, quite a nice one really. We had a good landlord, who basically advertised two rooms separately, and arranging meetings to create a flatshare.

This flatshare was sold to me as a young lady,  let’s call her Shakespeare, visited periodically by her boyfriend, who’ll we’ll call Casper.. We got on OK, in the brief time we knew each other, and for the first 6 months of our lease, everything was fine. Well, mostly fine; Casper was around almost always, and he broke my xbox, but eh. So, I signed another lease with Shakespeare; 12 months this time.

This was a mistake.

Casper and I argued, about some weird odd thing. I was going to have someone sleep on the floor for a few days, just coming into the country, and needed somewhere to crash whilst they got on their feet. This apparently was beyond the pail. Suffice to say, words were had, shouting happened, and I no-longer felt safe there.

The first night was the worst. I basically setup noise traps next to my (lockless) bedroom door, and slept fitfully, waking at the tinyest noise. I was scared of being attacked by Casper, he was bigger and stronger than me. The following days were unpleasant in the extreme. I spent as much time as possible outside the flat, eating at a Wimpys, spending massive quantities of time in the Office, basically hiding from my flatmates. In the end, I decided to forfeit the lease, and left, moving back in with my parents. I ended up continuing to pay for my part of the lease for another 3 months, an action that combined with the commuting now involved to get to work cost me along the lines of £3,000.

But those few days, before I decided to forfeit, were some of the worst nights I’ve ever had. I can totally believe First Night Sleep is a thing. I just think it may well not be just about your First Night somewhere.

It turned out, that Casper shouldn’t have been staying in the flat with Shakespeare. Landlord was unhappy about that. Also, they got a dog, whom I had been told was gained with Landlord’s tactic approval via a don’t ask, don’t tell basis.

During the explanation to the (nice) landlord, I might have let slip about the dog. The tactic approval turned out to be a lie, amongst other things, Landlord was Not Happy, especially due to Shakespeare and Casper’s actions after I left. I was actually offered the room again, with a new flatmate. I refused.

That is also why I eventually moved out of London at the first opportunity. I had a limited-length houseshare in London with a friend, but just couldn’t bring myself to share with someone random again. Work needed people in a new site, so I requested a transfer, somewhere where I could afford (just about) my own place. I’ve been happily away from London (apart from hotels and day visits) ever since.

I wonder if writing this is interesting to anyone? Also, I do wonder how narcissistic it is for me to publish it publicly. Maybe for another blogpost, another day.

What follows is partially a mind-dump of thoughts and feelings relating to this, partially me telling my (religious) family that I’ve lost my faith, and partly needing to say these things somewhere. There’s a lot of “I’s” here. This is me talking about me.

So, the sharp eyed would have noticed that the word ‘Christian’ has been slowly vanishing from my profiles, across my social media accounts. This was not unintentional.

I lost my faith.

I used to have a church, I went to every Sunday, pretty much without fail. I spoke to the pastor there, told him I was struggling, I was loosing my faith, asked for help. Got pretty much unhelpful platitudes in return. Additionally, around this time, a petition was going around the church, against same-sex marriage in the UK. What we really needed was more hate, distrust, and disgust going around. The well-meaning congregation probably didn’t realise it, but that was the undertones I was hearing from them. I stopped going, “what God of Love would accept that?” I slowly, very slowly, drifted back into depression, with fewer tools to aid me.

I was shouting into the ether, asking for help from God, asking for guidance. Nothing came, nothing helped. My faith was slipping.

Eventually, the answer to the question in my head “Is there a God?” started returning the answer ‘No’. In my head, that question had been returning ‘Yes’ since 1998. My faith broke. You’d have thought it would’ve been a quick process, but it took many, many months, slowly, painfully, tearing away. I used to think there was a plan. I used to think someone bigger than myself cared. And slowly, over time, those thoughts, beliefs, started being evaluated ‘untrue‘ in my head.

The process of loosing my faith itself was hard, painful, and very unpleasant. Mixed into this is Guilt. A lot of Guilt. I feel I’m letting my family down, who’re all actively believing practising Christians, mostly Evangelical or Anglican.

Slowly, my sense of self has been adjusting, my moral compass set free from what the Bible says, what my interpretation of it said, what Pastors, theologians I trusted said. I still have morals, if anything they’ve become stronger, no longer linked to an external force. Mostly, they’re the same as current liberal evangelical Christian base ethics, but stronger against homophobia. I can certainly rant about people being horrible to one another quite a lot, if you care to listen sometime.

You might’ve worked out the gap, between my profiles changing, my faith breaking, and today, is not insubstantial. Though it was a painful process over months, it was complete back in 2014.

Why the gap? My family. I didn’t want to tell them. I’m afraid of the reaction, I’m afraid of getting treated differently, badly. It might be a silly fear, but it’s there nonetheless. In fact, I’m wimping out by writing this here and posting it to my social media instead of contacting them. My Mum knows, I told her a while ago, I was tearing myself into bits, I had to confide in someone, but apart from that, not even the Brother I love to bits knew, though I suspect he worked it out a while back. He’s very very intelligent.

I’m scared. I’m lonely. I’ve great friends, who have been helping. I’ve great work colleagues, one of whom in particular is the most intelligent person I’ve ever met, and though he can be a pain in the neck (he knows it), his advice has helped me greatly. The friends I’ve made in the IndieStone community as well have helped me greatly.

I’m currently coming out of this bout of depression, the stormclouds are slowly, achingly slowly, being inched away. I can see the sunshine again, more and more; The dark thoughts about suicide in the night haven’t troubled me at all recently. But, I’m still filled with guilt. Guilt over dropping my faith. Guilt over not being the son, cousin, brother, grandson, nephew, my family expects me to be. Guilt at saying “No, a lot of the moral ‘rules’ of the modern Church are stupid, and I reject them entirely.”

I’m still left with a void. I knew faith, I knew that assurance and belief, and now it’s gone.

So. That’s why loosing my faith sucks. I had to say it. And I had to vent.

If you’re my family reading this, I’m sorry, I couldn’t say this in person, I couldn’t say it via text or phone call. I’m too scared. I’m in too much pain right now. Don’t judge me, please.

At this point, I’m fairly certain my faith loss is permanent. There’s a reason I’ve been describing myself as Agnostic/Don’t Know though. I truly don’t know if there is a loving God, I don’t know if any religion is right, if none are. However, whilst I’m coming out of a really dark place, I’m also not really open to conversion attempts, nor anything other than discussions about faith over a drink somewhere warm and comfortable, and the important bit here *in person*. 🙂

Saying that, I’m filled with love for my family, my friends, and hell, pretty much everyone on this weird, wonderful, strange, horrible, horrific planet. 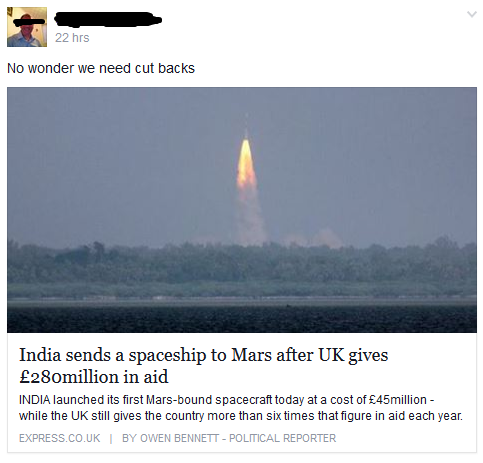 So, this popped up via my town’s facebook group. I couldn’t resist responding. If you’re curious, here’s the wikipedia page on the Indian mars probe.

My response to this, and the assorted “Yeah!”, “We should give them nothing” etc, I responded as follows;

Do you understand what an amazing achievement that was? The normal cost of any western probe to Mars? Hell, I’d gladly pay more tax I can’t afford to for that stunning gem. It was, and still is absolutely incredible they did it for so little, and with so little. It’s giving them a reason to strive, to push for something different, for knowledge and understanding and plain old new technology. You know, just that thing humanity must get more of quickly, or watch our world burn from a fire of our own making. We fail, we get to watch our grandchildren or our great grandchildren die. All of them.

I wonder if this has anything to do with the slow-motion civilization collapse depicted in my current read, Ready Player One?

I spent this evening building my new computer, getting it all plugged in with the cables tidied away in a small (read a little too small) case.

3 hours later, everything is connected. Moment of truth… and nothing happens. Red light on the motherboard, not POSTing. 1 On initial power, the CPU fan twitches.

I’ve seen this one happen once before – the motherboard is probably touching the case. (A hardware guy at work also suggested that it might be fluff in the CPU socket, bent or damaged pin.) You can get plastic sheets to put under the motherboard. Last time, I and my brother used sellatape – put it over the pillers the motherboard is raised on, and then screwed through the sellatape. Before I try something quite that drastic though, tomorrow evening I’ll try taking the board out and check its raise clear from the case. I’ll probably also remove one or two of the pillers.

I did mean to take pictures of building it, but then I though, who would be interested?!  Heh, I’m just dumping this from my mind as I haven’t had time to prepare anything else… If this is actually interesting to you, please comment 😉