Recently my eyes have been a little strained using the computer. I think it probably has something to do with the misplacement of my reading glasses somewhere at University. Hopefully I’ll find them before my Mum finds out and goes nuts lol.

Anyways to reduce browser related eye strain, I found a handy script for Greasemonkey (in Firefox) that kinda inverts the webpage/makes it less white and a bit easier to read (higher contrast). Its not perfect but it’s a handy hack until I can do some more hunting for my glasses!

Options are customisable, so you can restrict the websites it works on…

Oh, and here’s a screenshot: 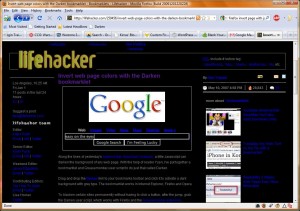 I’m using Adobe Acrobat (for compatibilities sake only, please post your favourite PDF program in the comments below!), but I’ve been rather annoyed recently at it having a tendency to hang Firefox if I tried to open more than one PDF file from the internet.

Simple fix/hack – make Firefox save PDF files rather than open them. 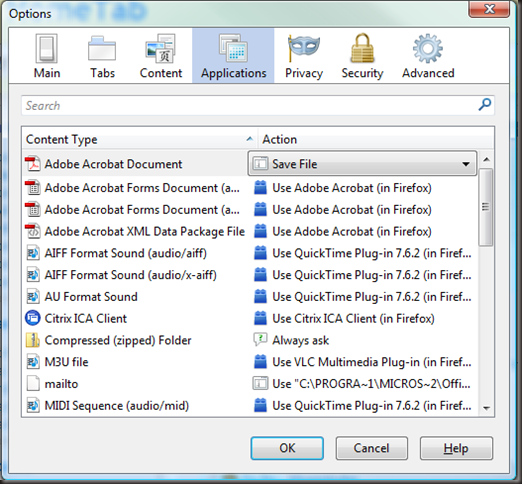 Ps get Session manager to save yourself loosing a window full of tabs or having to do a horribly manual procedure like recovering tabs from a accidentally closed Firefox window.

[Kirrus: Say hello to my brother, Garreth, who wrote this post. He’ll be posting every now and then :))

Unfortunately this time I left open a popup window and clicked the X close button, thereby killing all my precious tabs!

I have seen on a forum that this can be avoided by clicking File\Exit, but I’m already in the habit of Xing everything, and besides I needed my tabs back!

I found on another forum the name of the file sessionstore.bak, so I did a search and lo and behold it found a couple of session files in my Firefox profile directory. I cracked open the .bak one in notepad and there amidst loads of junk was the urls/tabs I had open.

Firefox of course falls for my fake ‘crash’ and prompts me to recover my precious tabs. A swift click later and Lo and behold my tabs were restored!

I’ve now installed session manager add in again and set the ‘undo close window’ feature. Apparently Mozilla are going to integrate the feature in 3.1. (That is 3.1 not 3.01, so not just yet :'( ).

Enable Undo close window and set that number of tabs to high!

Firstly, apologies about the lateness of writing a new post. I’ve been struggling with my server, trying to work out why apache2 is eating RAM. I’ve made a really nasty hack to sort it out for the moment though, which will give me more time to find out what is going wrong.

One of my old friends from Church sent me an email, asking me what was wrong with his firefox. Every time he launched it, what appeared was firefox 2. Very strange, since the version of firefox he has installed is:

Well,  that looks like the normal browser to me. At one point, he has had the “ubuntuzilla” browser installed for a little while. (But not anymore).

A couple of questions on the Ubuntu-uk mailing list didn’t turn up anything. So, I asked “how do you find what binary a command runs”? The answer came back from Matthew Wild (thanks!):

I cheated a little. I’ve not come across $(command), but I have come across `command`. So, I asked my friend to run “ls -l `which firefox`”. He replied with:

Er.. that looks wrong to me. The packaged firefox binary for version 3 is in /usr/bin/firefox-3.0. Looks like the uninstall of ubuntuzilla didn’t go so well. I asked him to run:

Which removed the old link, and added the correct one. (I should have asked him to run those commands through sudo thinking about it..)

That solved his issue and he’s now happily running firefox 3. Anyone have a better way to implement this fix, if we ever need it again?

Matthew kindly explained the difference between “$(command)” and “`command`” in earlier today. No difference 🙂

$(command) is easier to send to people so they don’t have to find the backtick key. (UK keyboards, above the tab key)

In ubuntu, the default system shell is “Dash”. That does speed up your system boot, but it also introduces problems with those scripts which are designed to run in bash, but use /bin/sh to execute. (Which is a surprising amount… this has solved many problems for me. Especially with Asterisk and freePBX.)

Monit is in the ubuntu repositories: