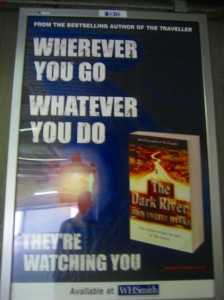 Now, this is what I call irony.

Currently, I’m going past this poster every time I go through a certain underground station.

(Cookie for the first person who guesses which station *).

As you can see, its an advert for the John Twelve Hawks book “The Dark River”, which apart from being a good read, contains a insightful set of images about our current existence in a surveillance state.

Almost directly opposite this poster, almost staring at it, is this delightful example of exactly that surveillance state: 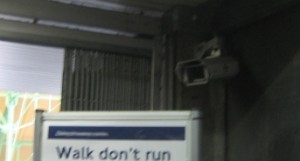 In other news, I still think that Daviey (of  Ubuntu-UK Podcast, amongst other achievements, fame) sounds almost like one of the London Victoria Tube station announcers. Something in the inflection of the voice…

Work is going well. I’m quite tired and haven’t had much time spare to do much I like. I’m coming to realise that I can’t afford to run a car, and live close to work. Great. Sell the car, or put up with 2 to 2 and a half hour commute. Wonderful.