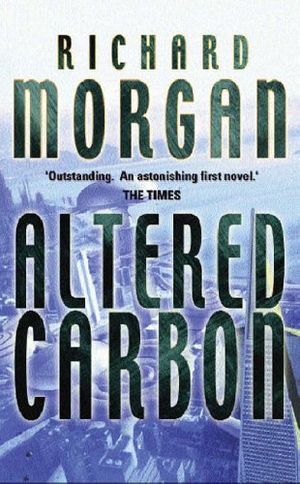 I finished Altered Carbon, the first book by Richard Morgan, Sci-fi, a couple of days ago. It’s taken a few days for my ideas upon it to crystalise..

It’s a complex weaving book, very, very good for his first. The plot moves thick and fast, set in an ugly futuristic society. The technology of the sci-fi not that new, but its a novel implementation.. what happens when humans can be digitally stored, but set in a plot. My most stringent criticism would be that the primary character shows borderline superhero syndrome, or of being a “superhero” in a world that should have none. Mostly explained in the story well, but borderline. If I want to read a superhero story, I’ll go read a superman or batman comic 😉

The book touches on our societies current quest for immortality, and it’s something I’ve thought of recently as well. Our society is broken, and still reeling from the changes that computers have brought upon it. We can now communicate a lot further a lot faster than ever before. It is unlikely, that had I been writing this 20 years ago, that this post would have been able to exist, let alone be able to be read by people living almost anywhere in the world. We seem fixated with our human needs; you just have to go on google, and be a little careless to bring up an example of rule 34 1 .