This is the second part of my autobiography write-up. If you’ve not read this before, start here.

For James, mainly, I’ve put way more emotional information in here, and stuff about how the divorce affected me, and continues to affect me, than I planned. So, if you’re a potential (or current) employer reading this, know I’ve gotten past all of this, and I’m working really hard to heal the scars my childhood left me. This isn’t really for you, it’s for him.

Dad reminded me of something that happened during the divorce. We were playing in the garden with some of my cousins, in fact on this climbing frame dad had got us: 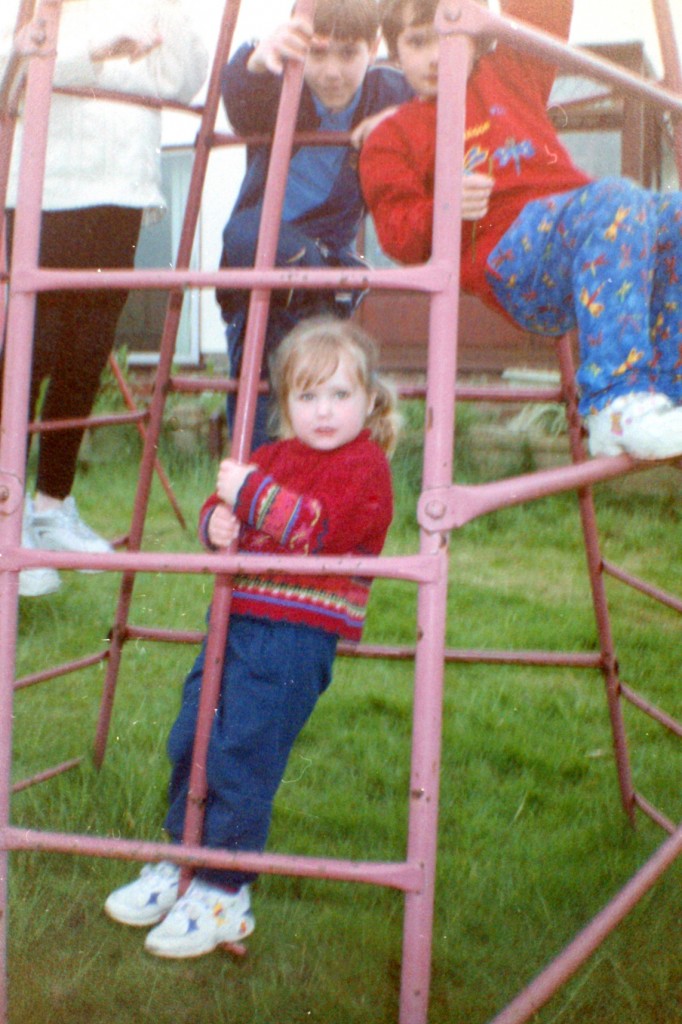 A couple of my cousins. The one on the far right is the one in the story that follows.

Let’s call her Terri. We were all playing on the frame, and she was hanging like a monkey, from the very top. However, she got stuck, couldn’t find a purchase, or climb off, and her hand was slipping. I got to the top, and grabbed onto her hand, hard, wouldn’t let it slip, and shouted for the others to go get help. Help came, no-one was hurt, although I might have hurt her hand not letting it slip!

Terri went on to become an *awesome* climber, and is in fact still the strongest climber of the lot of us, so no harm done. 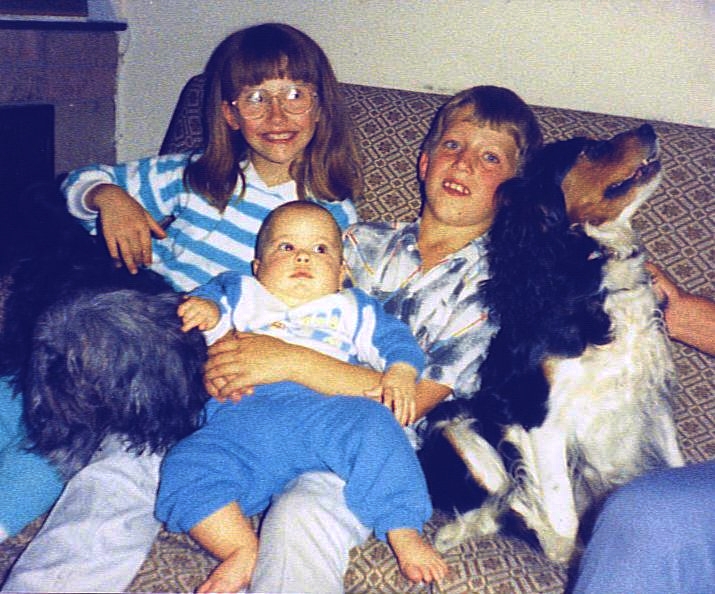 Baby me, with Nanny’s dogs, and some related family on Dad’s side.

Moving on! Mum and Dad both changed churches (we’re a christian family), related to the divorce. Mum eventually remarried. Dad’s church had a ‘covie camp’, basically a load of us went off with loads of other kids, and we did fun stuff, like go to a Gladiators TV filming, swimming pools and other really awesome things. It was a christian camp, so every night there’d be a sermon and other things going on. As we didn’t have much money at all, neither mum nor dad, church members paid for us to go, something I’ll always be grateful for.

I guess, if we go offtopic for a second, this is may be an affect of divorce some people don’t realise. Both mum and dad were spending most of their resources trying to bring us up, and give us a good place to stay whilst we were staying with each other. Divorce splits assets, and everyone has to spend more.

Throughout this period, mum leaned on me more than she should have, and I had a constant want for my parents to get back together. I knew, in my head, that it was impossible, but in my heart I just wanted it like it was before. Looking back, what I really wanted was what I had thought of as a safe place, a safe and stable time before everything changed. I also had a constant want to help my dad, I knew he was unhappy, and wanted to help, but couldn’t do anything. Also, I felt responsible for Garreth, my little brother, though we fought and argued just like most young children. This responsibility would imprint on me, to the point that to an extent I still feel responsible for him, and try to look out for him, when he’s with me. 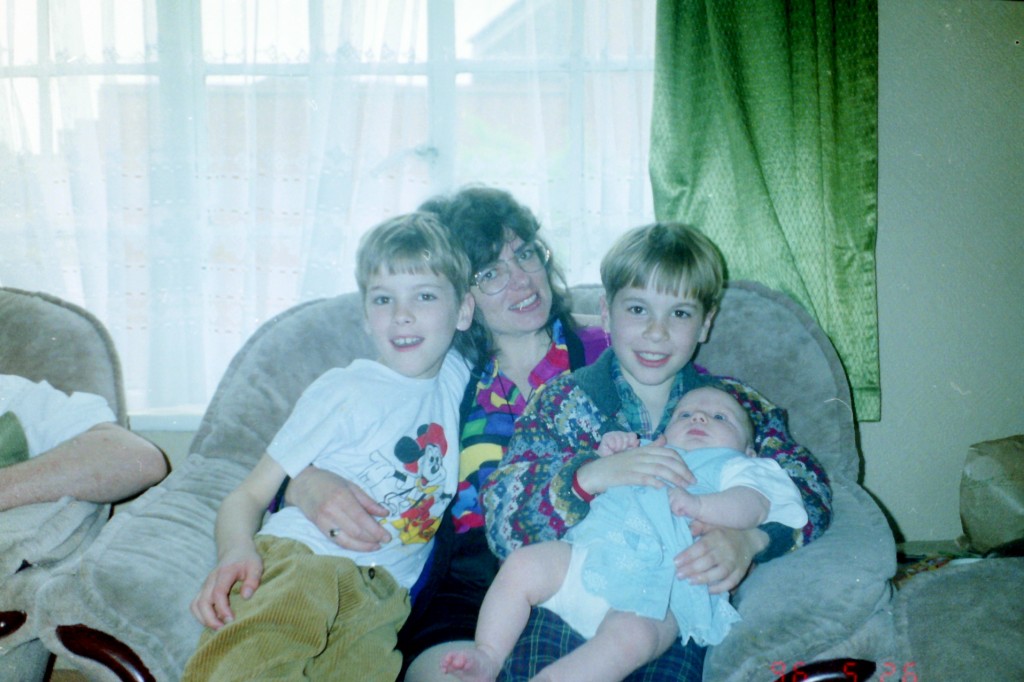 Left to right, Garreth, Mum, myself, and a baby B (cousin). Oh, and you can also see my Uncle C’s arm on the left.

During this period, I had real trouble handling my emotions, loosing control of them now and again. I was basically bottling everything up inside me, till it exploded. The explosions would be anger, and would blow up physically; it would be rare that I wouldn’t damage something or hurt somebody. After an explosion I’d be wracked with intense and overwhelming guilt and sadness.

During one of these instances, in Junior school, I remember I got into a fight with someone in the playground, and hurt them. I was called into the head-teachers office, and she basically said that there were other kids who were in worse suituations, I should just deal with it. Looking back, I’m just a little angry at that, all it did was make me internalise it all, and try to bottle it more. Just what I needed.

These spates continued till I was about 13, I eventually hurt a kid quite badly at school, to the point he was hospitalised and had a few stiches, as I’d trapped his thumb in a door. The secondary school of course reacted, but not how you’d think. I was put on a grade of emotional monitoring, having to meet with my tutor and set goals. The teachers also kept an eye on me to an extent. At that point I basically remapped the ‘fight’ explosion instinct to a ‘flight’ instinct, something that would stick with me, to the point if I have a anxiety attack for any reason now, or get into any sort of conflict suituation, I’ll run.

One last thing that was left in me during this period, was the following:

The covie camps we went to as kids were really fun, and eventually would go on to have a *massive* impact in my life, again changing me. But, I’ll talk about that in the next part: To Be Continued.

A friend asked me to tell him about my life, some of the stuff I’ve gone through. I’m a bit nervous about putting it online, since there’s security implications, and I totally don’t want to sound narcissistic. I’ve changed some facts, and not put some in for aforementioned security reasons. This is of course from my point of view, and has my bias, and will be text, lots and lots of text.

So, if you’re sitting comfortably, I shall begin.

I was born in 1987, in a snowy city overseas, in a British Military Hospital, as dad was an army nurse. This has made life a little more interesting than normal, as technically, I’m not English, Welsh, Scottish or (Northen) Irish, but British. My place of birth always makes official people raise an eyebrow. My brother (Garreth) was born around 19 months after me, in a standard english hospital. 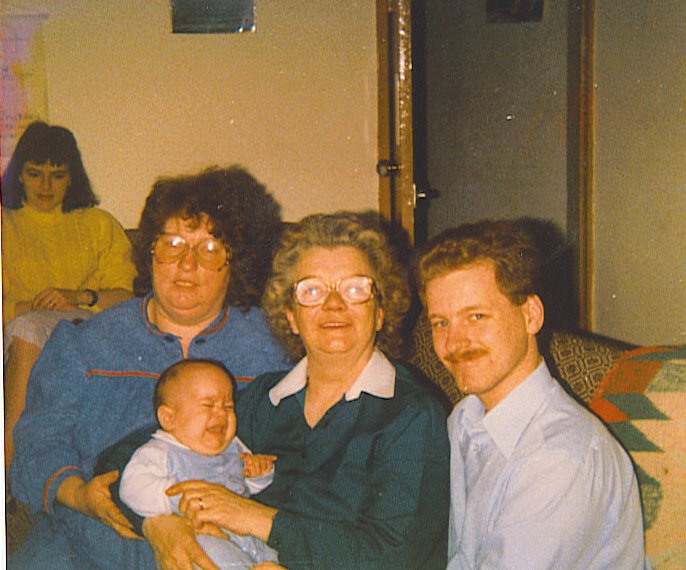 From left to right, Mum, Nanny, me, Great Grandma (dads side, shortly before she passed away) and Dad.

My first memory was, amusingly, swimming with a plastic lifebelt around me, in a hot sunny cyprus, quite young, thinking “I won’t remember this”.

I have broken and scattered memories of my childhood until my late teens really. If I dig really hard I can pull out more fragments, but not many. Quite a lot of my early history I mainly know through childhood photos, and the stories my parents told me.

Dad was posted to Cyprus a couple of times, we went with him and mum when we were quite young, pre-school age. A couple of funny stories I’ve been told; there’s a photo somewhere of me *just* as I bite into a lemon. My face says it all, EWWWW! I did go on to love the taste of lemons and sour things though, so something imprinted 😉

Another story, one time myself and Garreth somehow managed to climb up and grab dad’s car keys from a key hook on a wall. We then managed to open the car, and successfully start the engine. Bear in mind, this was whilst we were in cyprus, so only 5 or so at the time 😉

Myself and Garreth (in that order), in Cyprus

Dad left the army, relatively soon after we started school, he and mum didn’t want us to grow up as army kids, and he didn’t really fit into the army, from what he told us. Mum at this point was also apparently quite unhappy.

At age 8, my parents started divorcing, a process that took a few years. I have a few visible memories during this period, of a social worker asking us who we wanted to live with, and mum coming home one day, and telling us it was over. I also remember one or two fights between my parents, and suspect I heard/saw far more that were supressed.

The most powerful memory I have during that period, was clinging onto my dad, as he was dropping me off in the school playground, not wanting to ever let go, not wanting to leave him, at the start of a Junior school day. I would have been around 8 or 9 at this point. They somehow managed to get me separated, dad left, and me into a quiet office. I fought, hard, wriggling whilst someone held me, trying to calm me. Eventually someone said ‘Johnathon, you hurt me!’, and instantly I calmed. I never wanted to hurt anyone, ever, I just wanted to be with Dad.

That divorce would go on to shape me, to an extent I’m only now realising.